Physics NEET: Work, Energy and Power Potential Energy of a Spring
In Progress
Lesson 10 of 13
In Progress
← Previous Next→

Potential Energy of a Spring 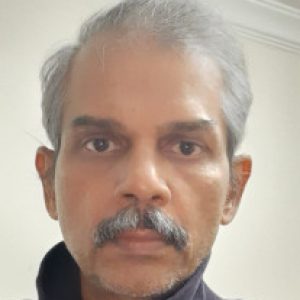 The spring force is an example of a variable force which is conservative. Fig. 7 shows a block attached to a spring and resting on a smooth horizontal surface. The other end of the spring is attached to a rigid wall. The spring is light and may be treated as massless. In an ideal spring, the spring force Fs is proportional to x where x is the displacement of the block from the equilibrium position. The displacement could be either positive [Fig. 7(b)] or negative [Fig. 7(c)]. This force law for the spring is called Hooke’s law and is mathematically stated as

The constant k is called the spring constant. Its unit is Nm-1. The spring is said to be stiff if k is small.

Suppose that we pull the block outwards as in Fig. 7(b). If the extension is xm, the work done by the spring force is

This expression may also be obtained by considering the area of the triangle as in Fig. 7(d). Note that the work done by the external pulling force F is positive since it overcomes the spring force.

(a) The spring force Fs is zero when the displacement x from the equilibrium position is zero.
(b) For the stretched spring x > 0 and Fs< 0
(c) For the compressed spring x < 0 and Fs> 0
(d) The plot of Fs versus x.
The area of the shaded triangle represents work done by the spring force. Due to the opposing signs of Fs and x this work done is negative, Ws = -k(xm)2/2.

Thus the work done by the spring force depends only on the endpoints. Specifically, if the block is pulled from xi and allowed to return to xi :

The work done by the spring force in a cyclic process is zero. We have explicitly demonstrated that the spring force (i) is position dependent only as first stated by Hooke. (Fs = -kx): (ii) does work which only depends on the initial and final positions, e.g. Eq. (17). Thus, the spring force is a conservative force.

We define the potential energy V(x) of the spring to be zero when block and spring system is in the equilibrium position. For an extension (or compression) x the above analysis suggests that

You may easily verify that -dV/dx = –kx, the spring force. If the block of mass m in Fig. 7 is extended to xi and released from rest, then its total mechanical energy at any arbitrary point x, where x lies between –xm and +xm will be given by

where we have invoked the conservation of mechanical energy. This suggests that the speed and kinetic energy will be maximum at the equilibrium position, x = 0. i.e.,

where vm is the maximum speed.

Note that k/m has the dimensions of [ T]2 and our equation is dimensionally correct. The kinetic energy converted to potential energy and vice versa, however, the total mechanical energy remains constant. This is graphically depicted in Fig. 8.

Example 8
To simulate car accidents, auto manufacturers study the collisions of moving cars with mounted springs of different spring constants. Consider a typical simulation with a car mass 1000 kg moving with a speed 18.0 km/h on a smooth road and colliding with a horizontally mounted spring of spring constant 6.25 × 10³ C. What is the maximum compression of the spring.

Fig. 8 Parabolic plots of the potential energy V and kinetic energy K of a block attached to a spring obeying Hooke’s law.

The two plots are complementary, one decreasing as the other increases. The total mechanical energy E = K +V remains constant.

The kinetic energy of the moving car is

where we have converted 18 km h-1 to 5 m s-1 [It is useful to remember that 36 km h-1 = 10 m s-1 ]. At maximum compression xm, the potential energy V of the spring is equal to the kinetic energy K of the moving car from the principle of conservation of mechanical energy,

We note that we have idealised the situation. The spring is considered to be massless. The surface has been considered to possess negligible friction.

We conclude this section by making a few remarks on conservative forces.

Example 9
Consider Example 7 taking the coefficient of friction, μ, to be 0.5 and calculate the maximum compression of the spring.

In presence of friction, both the spring force and the frictional force act so as to oppose the compression of the spring as shown in Fig. 9. We invoke the work-energy theorem, rather than the conservation of mechanical energy.

The change in kinetic energy is

The work done by the net force is

which, as expected, is less than the result in Example 8.

where E is the total mechanical energy. Over the path this assumes the form